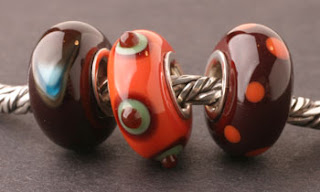 Well within 24 hours of his arrival he's on 'antibunnionics ' would you believe , little man has a snotty nose bought on no doubt by the stress of leaving his mum travelling the length of the country and moving in with us !
Still he's doing well and coping with endless cuddles ! He has central heating in the shed for the time being until he gets his new coat and moves into his new house ! Clever chap uses his litter tray all the time - except for when he has the occasional accident bought on I think by the antibiotics - he tends to hold his wee and explode at rather inapproriate moments - Tom got hit big time and was none too pleased .
My new website is coming along its just getting to that exiting stage as it starts to come together so watch this space for updates hopefully it won't be too long now .
New Buddies going in the shop in a min ,a slightly more organic lot unlike the last few weeks but I hope you like them , I did slip in a little Chocolate Orange set for those of you that like the bright ones .
Clocks just chimed 9pm so off to upload them now .

I loved the brighter beads from the last 2 weeks and that chocolate orange set is certainly good enough to eat!! One day I will log on in time to actually buy the ones I like! Juliex

Gorgeous beads as always, Manda!! Sorry to hear about bunnyboy - hope he gets better soon!!

Hi Manda,
What a lovely set of buddies this week - I love Galactica. I haven't bought a new one for a while but wear my other two loads.
The Easter bunny is so cute - I hope is nose stops running soon!
I've just started my own blog, so if its ok with you can I add a link to yours?
Ali

Thanks Julie they were a favourite of mine sorry you missed out actually think my clock chimed early so blame the Victorians !
Julie - Benjy is doing really well a bit of a tinker on the quiet he now has central heating to keep him cosy and well !
Ali - would love to link blogs and I am glad you like the buddies this week and enjoy your others so much .
Thanks all for visiting and taking the time to leave a message !

Beautiful buddies as always, organics are my favourite.

Poor Benjy, I am glad to hear that he is on the mend though.

Classic hiding place for the Easter Eggs, must remember that one!