Mangobeads Me and 'My Folklore Collection' 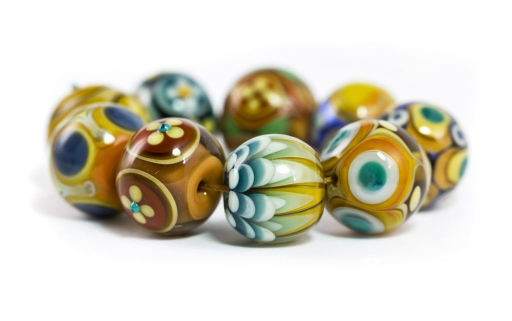 Well it's a little time since I did this for sure. Time to rectify that I think :)

As many of you know David and I took over a small workshop 18 months ago. We now have a 10 station lamp work studio where we host our own workshop and invite visiting tutors to teach here in North Devon.

I won't deny it's been a tough 18 months, apart from the usual business related problems I gave up my days at home and became a full time working girl at the studio.

Sadly it meant I also gave up a lot of my bead making time, it also took away for me the spontaneity of my creativity as I have had to plan my bead making around deliveries, workshops and general business related stuff.

In January this year I can truthfully say I was feeling uninspired and a little sad and sorry for myself. I Love the workshop and everything it brings us but I seemed to have given up my life to it and was beginning to loose site of where I was going with my bead making.

Having had so little time to make beads the selling side of things has really fallen for me such a sharp contrast to how things were when I first started silver coring back 4 years or so ago.

So with Flame Off looming and the prospect of being a 2012 demo artist very much on my mind , we decided something had to change :)

Because my bead making time had become so precious I had started expecting a lot of myself in the few short hours I could manage at the torch.My designs had become big and complicated and had a high failure rate which added to my despondency .

We also decided to put a torch back in my old workshop and clean it up. We removed the cob webs and the toads that had moved in, stocked it with glass and lit up !!

Now I can make beads in the evening and at weekends as and when I want to. Its just lovely to have my own bit of space to be creative in again.

So most mornings I shall spend at the workshop and then I plan to come home keep up with the housework and make beads again :) utilising my time much more effectively.

Now I am sure you will have noticed that I am accumulating a few of my 'Folklore' beads :) This is in anticipation of Flame Off in April this year. I will be releasing these beads at the event and they will then subsequently be available on my web site :) I have had lots of lovely lovely comments on them and a huge amount of interest and encouragement, so thank you all :)

So it's just to let know that the Mango behind Mangobeads is still here and shes looking forward to getting back into the swing of things with her bead making. 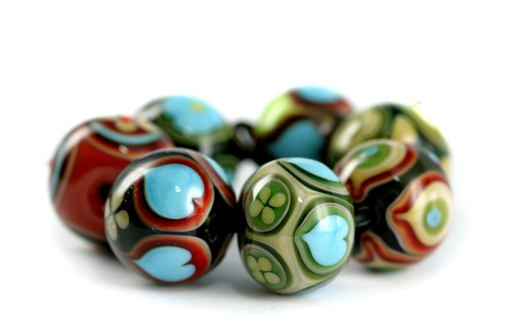 I know exactly what you are talking about here and I'm thrilled you're back on the torch. Your Folklore beads are absolutely beautiful and I'm looking forward to seeing lots more beads from you soon!

WOW, reading this is almost reading my own story. I know exactl how you are feeling. It is time to make changes here as well. I LOVE your folklore beads and hope to see more great lampies from you in the fture :)

Lovely beads Manda, you're private torch time is certainly paying off.
I know EXACTLY where you are comming from,I really miss my quiet time in my home studio, which sadly no longer exists, although......

You are such lovely people thank you so much Judith , Christina and Joy xxxx

Hmm it seems like your website ate my first comment (it was super long)
so I guess I'll just sum it up what I had written and say, I'm thoroughly
enjoying your blog. I too am an aspiring blog writer but
I'm still new to the whole thing. Do you have any tips for first-time blog writers? I'd
really appreciate it.