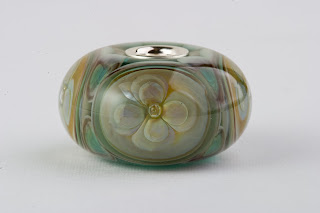 A wonderful Weekend.
We arrived home yesterday after a really great weekend, although its all past in a bit of a blur! We left home on Friday heading for London but inevitably got delayed by the closure of the M5 which was extremely annoying prolonging our journey to London so we consequently didn't arrive until much later than we had expected but never mind.

We spent Friday evening wandering around like country bumpkins in awe of all the thousands of people seemingly on the streets knowing exactly where they were heading and for what purpose !

We successfully found some food and headed for an early night exhausted already.

Saturday we were up bright and early and headed for Waterloo to catch the train to Esher for The Big Bead Show at Sandown park. We had intended it to be a reconnaissance mission to suss the show for potential bead rack sales next year but a surprise invite the week before to attend the British Bead Awards ceremony gave the visit added exitement and purpose!

I was thrilled to come second at the awards in the Lampwork Beads category, I entered one of my Victoriana focals .

We had a good look round and chatted to friends bought a gorgeous bead made by Rowanberry which I am thrilled with ! It was lovely to meet Jean Power from Bead Magazine and the crew Elizabeth and Maria they work so hard at putting such a fabulous magazine together for us all .

So time to head back to London and visit Origin which was also total inspiration overload, and then Covent Garden a lovely meal and collapse exhausted into bed .

Sunday was much quieter a visit to the V&A and the new Ceramics bit and of course the must look at Glass Hall !

Then a lovely meal with brother Alex and Hayley and a fabulous DimSum restaurant Ping Pong somewhere in Soho ? don't ask me where I was so very disorientated !

Then Monday saw the drive home and back to reality today ....... but a kiln full of beads to look forward to in the morning !
Posted by Manda at 15:42